"I'm just using sentence structure they're not aware of." 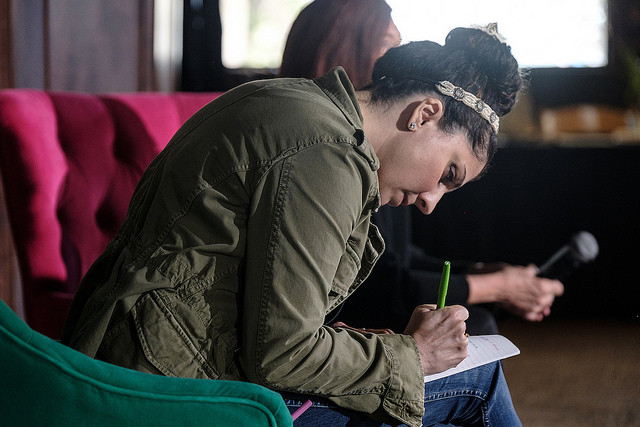 "I'm just using sentence structure they're not aware of."

This is a quote. From me. From my 14 yr old self. It was in response to a grade in English that I apparently felt was unfair. My family made fun of me with this quote for years and when it re-entered my brain a few weeks back - the ghost of embarrassing moments past - I could totally see why. I think my brain was actually trying to cheer me up by completely making fun of me.

I had been having a rough morning so naturally my brain decided to play a highlight reel of embarrassing and humbling moments for which there is no cure but to cringe, groan audibly, and perhaps marvel at just how far I've come. My mind can be a truly scary place.

My rough morning started off lovely - I woke up in San Francisco next to the person I love. That right there should have been enough to stave off most, if not all unpleasantries. Plus San Francisco is a visual feast. For two homebuilders, it's pretty much Oz.

We found a diner close by to have breakfast. Shortly after sitting down and deciding I was totally getting the waffle, I got an email about my speaker scores from the International Builders Show (IBS). For those unfamiliar, The International Builders Show is a big deal speaker opportunity despite a questionable acronym. A little while ago I blogged about my #metoo moment at the International Builder's Show. I was fresh off the stage after a high profile session called - 60 Design Ideas in 60 Minutes - when I encountered some rowdy builder boys. It was gross. But I still felt pretty good about my session. I felt good right up until the point when I got that email. For some reason I was nervous to click on the link.

The reason became clear as I scrolled down to the first comment of written feedback:

I thought many things reading that first comment. First off, rude. Second, ouch. I was responsible for 10 of the 60 ideas. Looks like this person felt cheated by exactly 10 ideas. Huh. I kept scrolling. Later down in the comments there was more about me...someone referred to me as 'the millennial speaker' and said simply, 'the millennial speaker was bad.' I'm not sure if they meant millennial as a descriptor of me or my content but since I'm deep in Gen X I'm choosing to see that one with it's silver lining - maybe I was mistaken for a millennial? Is that a silver lining? Then I felt cheap for seeing that as a silver lining because I'm proud of my age but in that moment I was feeling a bit desperate for a bright spot.

I've thought a million more things in between the time when I read those comments to now and I'm only going to write about the ones that matter and cop to the fact that for a short time, I let myself get pretty down about it and yes, I cried. From embarrassment. I wanted so badly to add value to the session and while I have to believe some found value in my words, I also have to sit with the fact that the ones compelled to speak up did not. That's disappointing. I can use that to fuel me going forward because that's where I'm going. Forward.

I am grateful to be surrounded by some of the smartest and kindest women in the world. As I repeated this story to them about receiving my speaker scores and knowing me like they do - they were full of wisdom.

My favorites were these:

When you have a point of view - a clearly articulated point of view - that veers from the norm, you should expect to ruffle some feathers, even piss some people off. You're doing your job if not everyone gets you. That's where you need to be.

Constructive criticism is valuable - these are just comments. They aren't telling you how you could have done better. The quality of these comments is frustrating.

And my very favorite of all:

Consider it a rite of passage. A debt paid for one speaking gig to go not as well so the next can go better than expected.

This is the one I loved the most because it feels almost productive. Like I crossed a milestone without even realizing it and now I can get back to the business of getting better.

While nobody commented that I was using sentence structure they weren't aware of - I'd be lying if I didn't enjoy laughing at myself thinking about this quote. I'm pretty fond of that 14yr old who was convinced of her own genius despite the grade she earned. She could teach the 42 yr old version a thing or two about knowing the value of internal acceptance.

In the end, I've decided to be grateful for the reminder that she's still in there.

Love our Garman home! They are the nicest, easiest to work with people too! When we move again we want another Garman home!