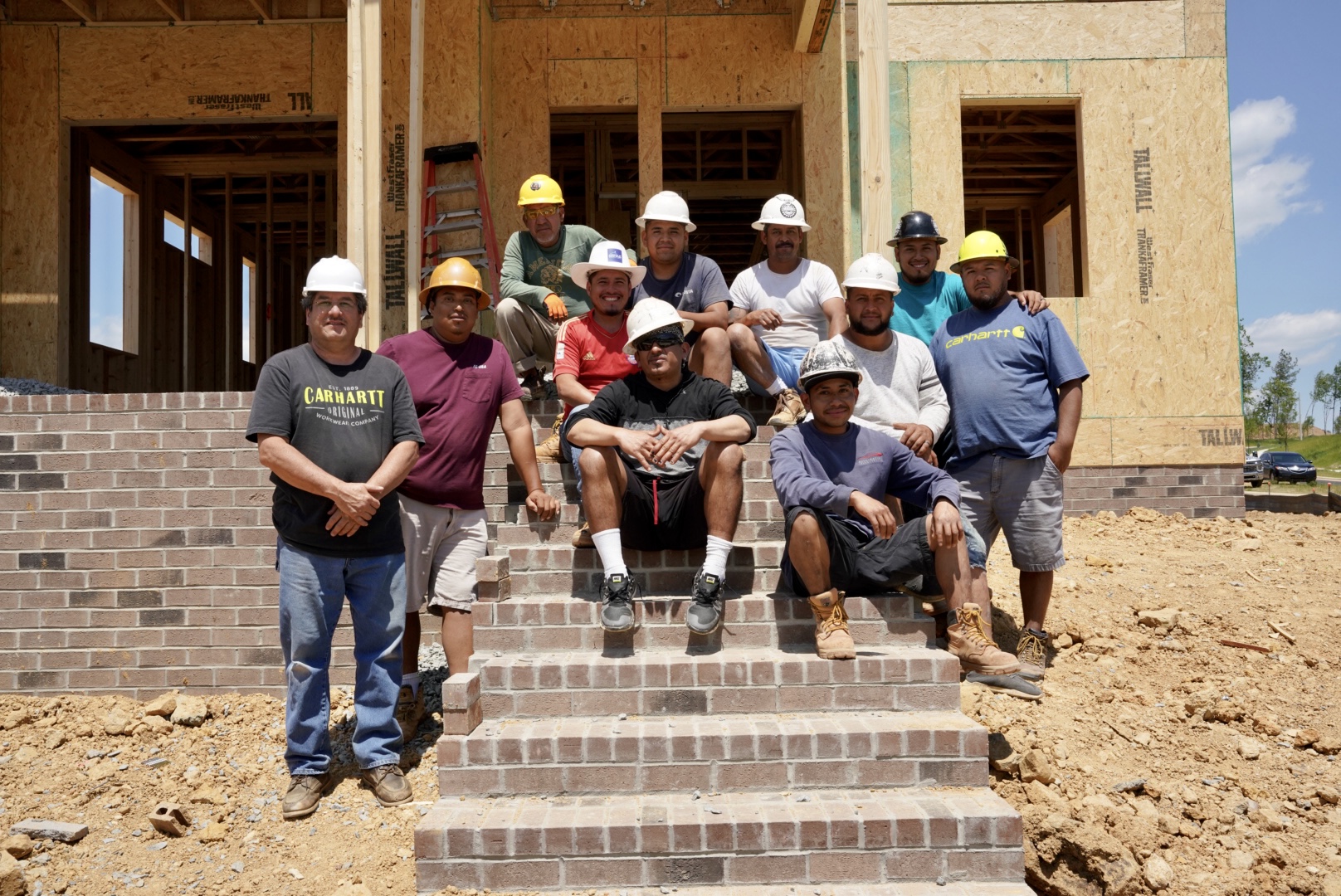 If you ever want to know what true luxury feels like I suggest showing up at your job site just after first light so you can be there the moment your framers show up followed by a truckload of lumber - which is roughly as valuable as a truckload of diamonds.

Cut to the video montage of me lip syncing ‘Diamonds are a Girl’s Best Friend’ in a pink hardhat instead of a pink gown like Marilyn Monroe.  The look is different but the feeling, I assure you, is the same.

I spent all of the week before last on a productivity high.  Seeing the framers raise a wall here, frame in a bedroom there, and suddenly there was a first floor.  And then a second.  And then we were swinging trusses and I was mesmerized.  Barnaby went from paper to real life in 4.5 days.  Like magic. 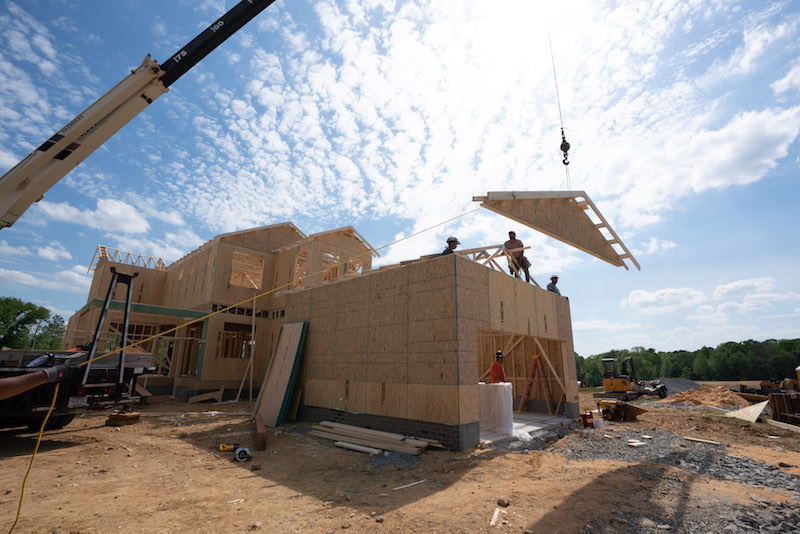 When the framers are onsite there is a vibe of playful boyish energy.  Of laughter and music and joy.  There was even a brief moment where I danced with one of the framers because the moment seemed right.  That's him looking like he's dancing even when he's framing. 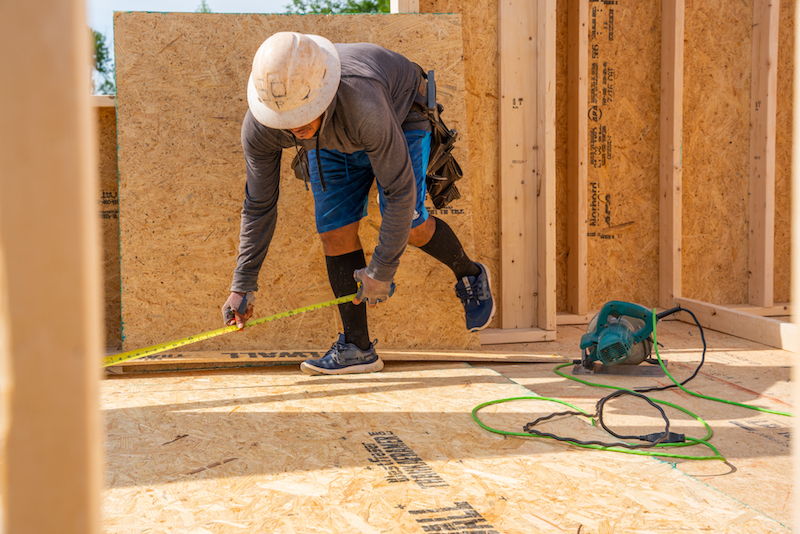 And a moment where I covered up another builder's name on the shirt one of the framers was wearing. 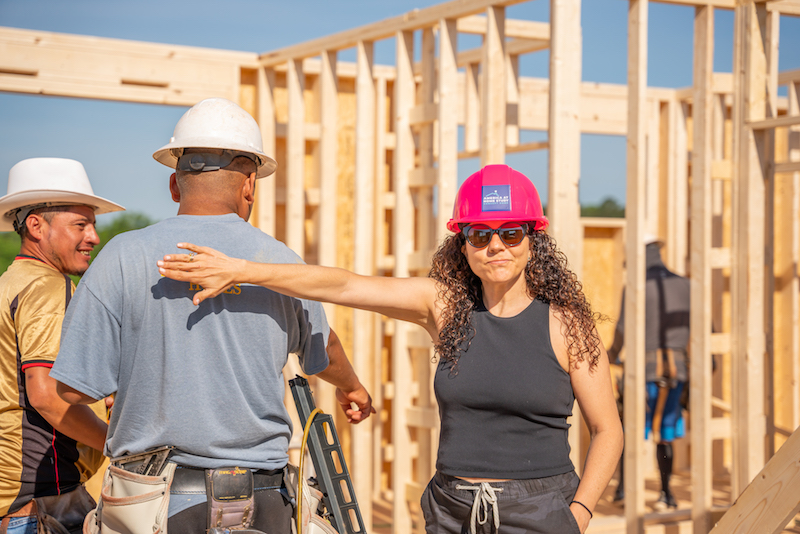 This is the same framer who asked his boss about the new construction superintendent for Garman (he meant me, having not known me in my other role at the company) and asked how old I was.  Which led to another moment onsite after his boss relayed the conversation and then promptly shouted across the jobsite, 'CUARENTA y SEIS!' after finding out my age as of next month. Good thing I'm good with my age being shouted from the rooftops.  Literally, the rooftops.

And then there was this moment when our photographer, Amber caught Francisco, the Jefe (HEF-fay) who wears a cowboy hard hat (because Jefe = Boss) in a brief moment of stillness. 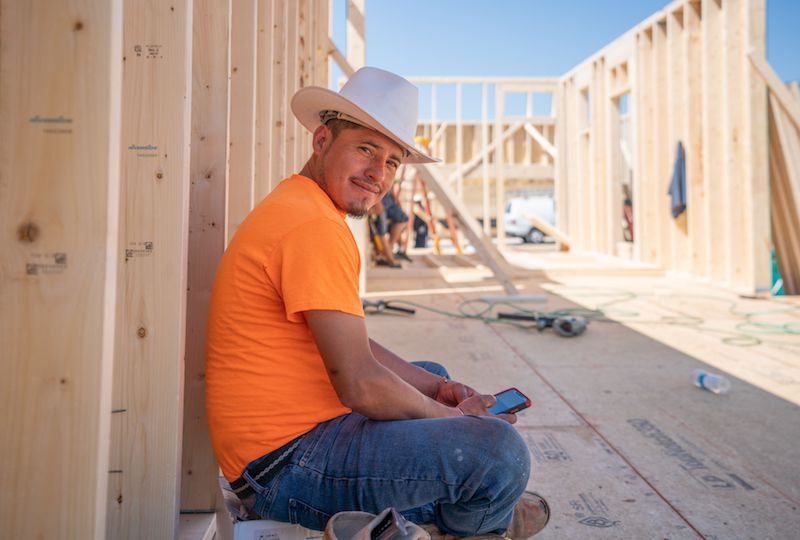 I love this shot.  When we started this project I asked Amber to capture as many faces as possible.  All the faces we rarely see.  Homebuilders like to show the consumers happy inside their homes.  And I like to show that too.  But I think it's just as important to show the faces of the trades.  The human hands who actually build our homes.  The ones who work tirelessly to bring our plans, our homes, and our homebuyers dreams to life.  Am I overly sentimental about these faces?  Perhaps.  But, as a whole, I think our industry is not nearly sentimental enough about them.

I went home every night feeling like a complete lightweight.  In awe of how hard these guys were working and embarrassed by how tired I was just watching and documenting. In running terms - it was like watching marathoners sprint past you when you're huffing through the first mile thinking you might actually die.

When the framers wrapped at noon last Friday we called the Garman team in for a brief review of the floor plan.  Basically, does the home we've constructed match the plans and do we still like it as much in real life as we did on paper. 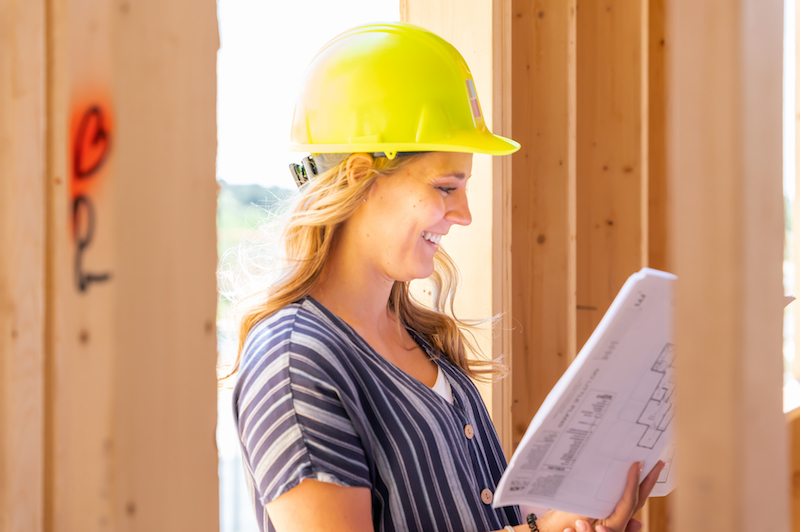 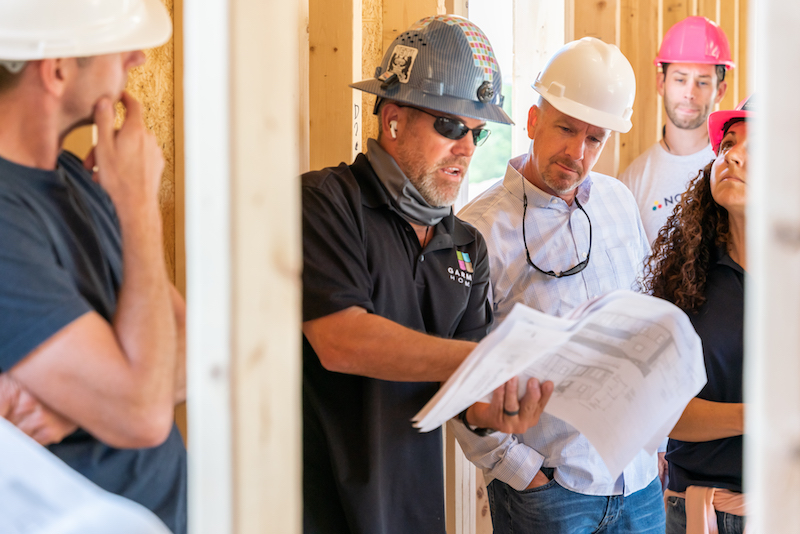 The Concept Home isn't a prototype in the traditional sense because we deliberately tried to reflect the findings of the America at Home Study while also building something at the edges of what we as builders/architects/industry experts have taught consumers to expect.  We've been prescriptive.  This room is for this.  This room is for that.  Blah, blah, blah, repeat.

Instead, we allowed ourselves to dream up different uses of space and ways of reflecting the findings of the study.  We imagined a life inside this home and built an interpretation of space to reflect that life.  A new interpretation on an old idea here ( we're bringing vestibules back).  A totally different allocation of space there (hall baths should be big enough for kids AND their parents who have to bathe them).  And hopefully a few spaces that feel like we didn't waste a single opportunity to strive for surprise and delight (you have to see that later).

This is me being delighted by Alvaro who runs his family's framing company, PIIN Construction along with his brothers Pablo, Obed & Roger and occasionally his dad, Nathanial makes an appearance on the crane.  And while I've never met the matriarch of the family, Hortencia, I want to say her name here and thank her for all the love and ambition she poured into her family, of which I have surely benefitted.  Btw, if Alvaro and I ever decide to become an act in Vegas we'd be called Dimples & Hair, I suspect. 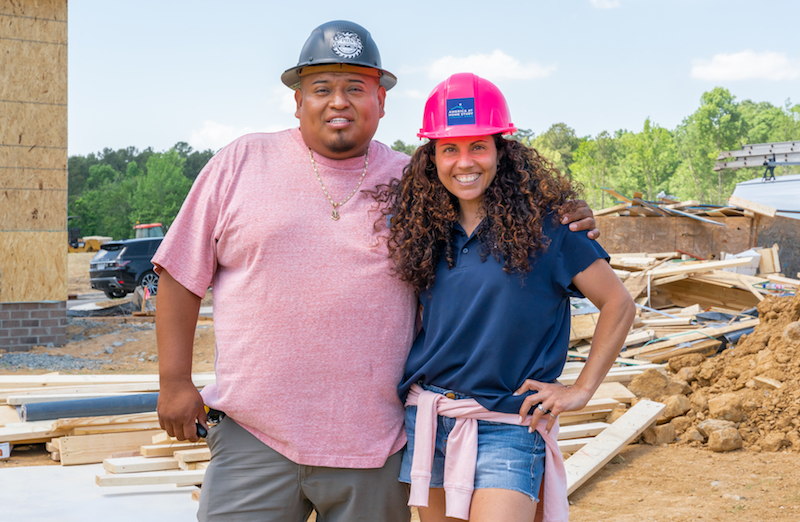 And at the end of the week there was this... 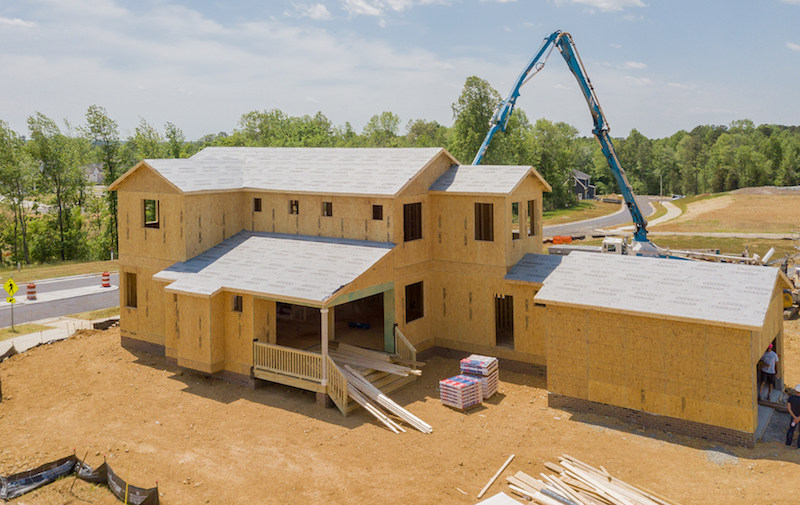 A brief moment of pristine newborn baby freshly framed house...before the rough trades came in and wrecked the joint in the best way possible...that is, forward.

The rough trades spent two days sprinting towards our big inspection on Wed.  It was a very different vibe than the framers.  Rough trades are serious business anyway and even more serious when staring down a nearly impossible timeframe between starting and needing to be inspection ready. 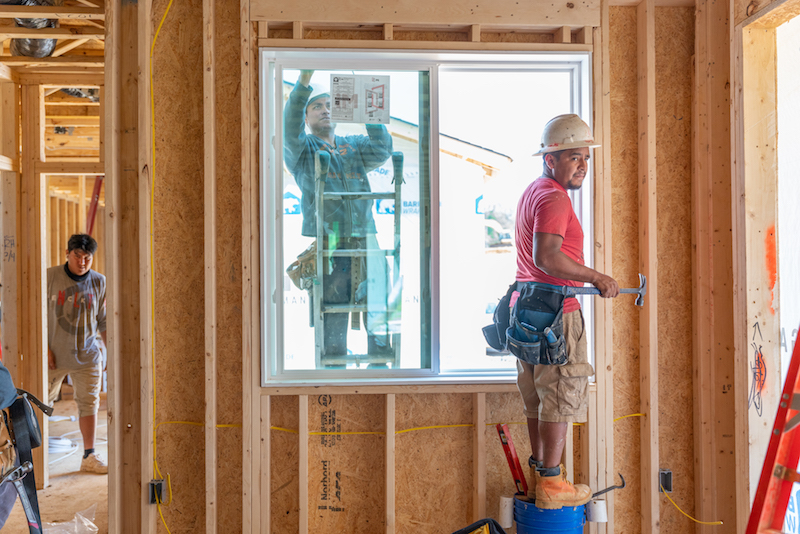 It's embarrassing to admit now that I was still showing up to the job-site like a puppy ready to play and find out all about them.  They were like the older dog looking at me like, can you not?  Funny I remember Teri (America At Home Study founder and my BFF) telling me about a time when Barnaby (house namesake and older dog) had the same reaction to Betty (crazy puppy who was real real excited to play with Barnaby).  Barnaby was having none of it and neither were the rough trades. In a word, it was rough. Pun intended.

I missed the framers.  No one wanted to talk to me and when they did it was to ask me questions I had a hard time answering or just didn't know.  A different kind of humbling than the framers and their endless endurance.  This one felt like a pop quiz I kept bombing.  A level of technical expertise I had to outsource to Jim or my Fairy Godbuilder, Kevin.  The bathrooms I was so excited about suddenly became a riddle to solve. 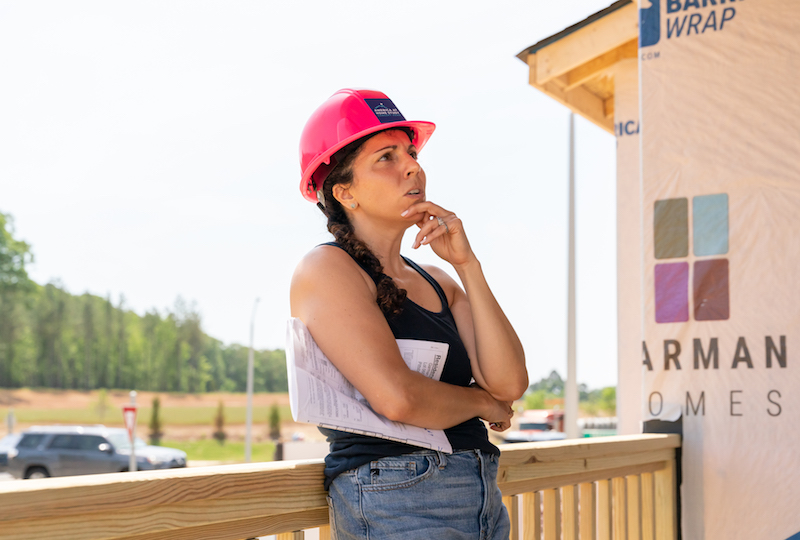 Them:  How do you want us to vent the fixtures?  Me:  Like you usually do?  Them:  We usually go straight up and there's a window there.  Me:  (silently cursing my love of natural light) ...ummm, can we go around the window?  (as I point to a tiny space on either side of the vanity hoping it's enough).

We figured it out though.  And we passed every inspection on Wednesday.  All NINE of them.  NINE!  I almost cried when the inspector said, "ok, we're good here."  I clarified, "good as in, ok to insulate?" He said, "yeah" like he wasn't releasing me from a self-imposed destructive stress prison that prevented me from sleep for several days leading up to that day.    I nearly cried.  I thanked him and tried not to say too much.  My voice was too thick and would give me away.  The tears were right there and so was every trade and two framers...they all came to the inspection so they could address things in real time and ensure we would do everything possible to get ok to insulate.  Turns out they already had.

Probably a good thing they didn't stop to talk to me earlier in the week.  Still the puppy in me wanted to be like, 'can't wait for trim outs!'

Cue eyerolls from the big dogs.

Great experience from sales to construction! Love the team and grateful they did such an amazing job on my home ❤️