$10,000 to Use as You Choose From Lower Rate Financing Options to Closing Costs

UNDER MY (TEENY TINY) UMBRELLA-ELLA-ELLA – WEEK 2 IN REVIEW 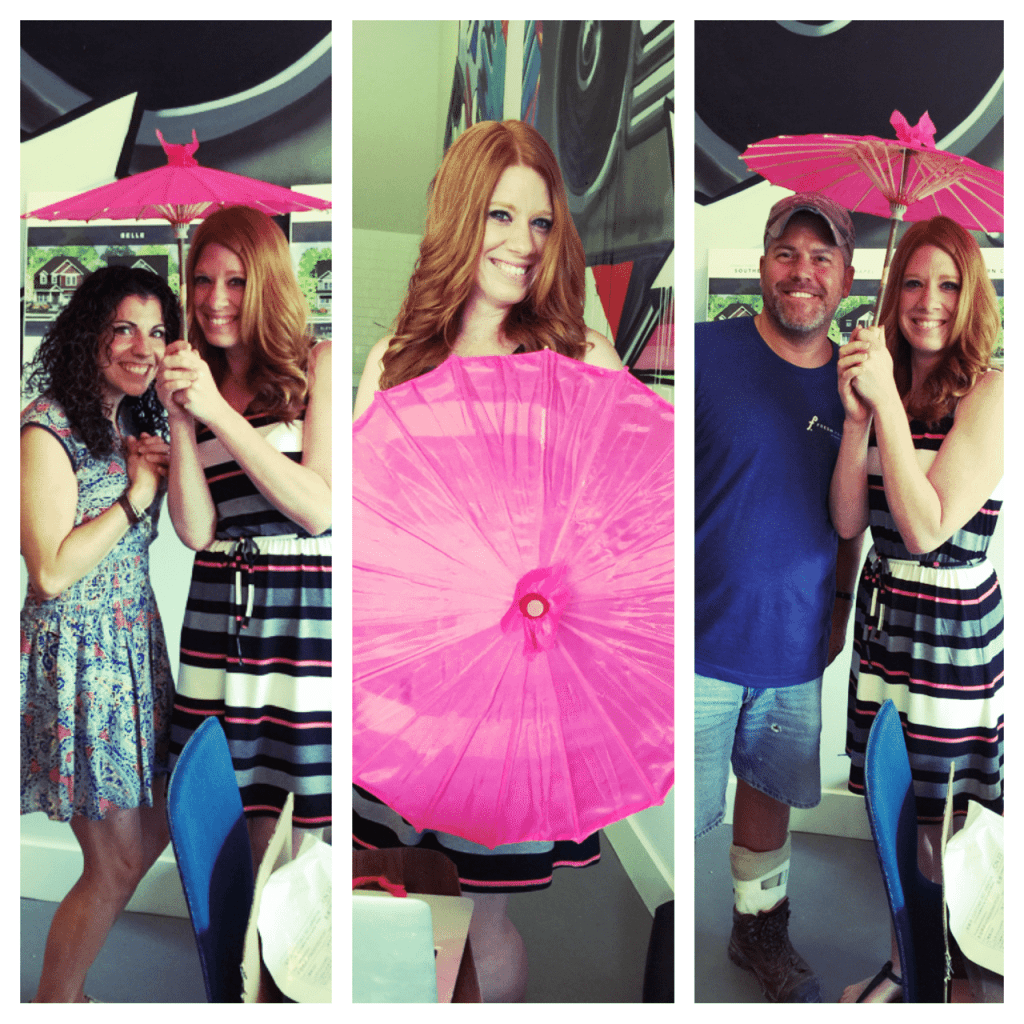 UNDER MY (TEENY TINY) UMBRELLA-ELLA-ELLA – WEEK 2 IN REVIEW

First things first…after last week’s nasty sunburn, we thought it only right to get some proper sun protection for our girl.  Sunscreen only takes you so far…so what do you get the most stylish builder on the block?  A pink parasol of course.

I didn’t mean to buy the worlds smallest pink parasol but that’s just what I did.  It looks more like an oversized drink umbrella than a parasol.  It’s just right to accessorize a cocktail roughly the size of a big gulp.  I don’t think it’s going to provide much sun protection and our big gulp cocktails aren’t going to accessorize themselves so sunscreen will have to stay on the job.

Which kinda defeats the hard part of the hard hat.

Monday was a holiday so Ginge packed 5 working days into 4 and hit all her big milestones for the week. Starting with her first job site crush on Clint from Griffin Masonry.  I can attest to Clint’s charms.  The man has a twang-tastic accent, knowledge for days and speaks fluent ‘acts of service’ like only a true gentleman can.

Clint showed up on Tuesday just as Janice was about to lose it because the rain from Monday washed away all the foundation heights they sprayed on the footings the week prior.  She was worried but Clint was all, ‘I got you’ and he even saved one of her block pins that had fallen out and was causing her all kinds of strife.  Clint’s calm demeanor was like job site prozac.

In non crush jobsite news – Janice also picked up the garage permit on Tuesday …by Wed footing inspections passed and she was ready to pour!

Also on Wednesday, she got her first experience with ‘Trade Time’ – the masons told her they would show up before lunch which apparently meant, 4 o’clock.  I don’t know about y’all but if I waited to eat lunch until 4 o’clock, heads would roll.

Last week Ginge also got her first experience with ‘Trade on Trade Crime’ -Duke Power came out to install her meter but couldn’t establish power because at some point, AT&T cut the line.  It’s hard out there for a utility.  And since the Duke crews have not been back out yet, Ginge put Will on notice for a generator.  We can’t have the framers showing up this week with no juice for their nail guns.  Hell hath no fury like a woman scorned, a teenager without wifi and a framer with no power source.  Ginge is all over Power Plan B.

In between scheduling and stalking her job site for trades, Kevin taught Janice the difference between level and plumb.  Level describes a horizontal plane while plumb refers to a vertical one.   For instance, a yard is described as level, a wall is described as plumb.  Kevin is a one-man construction wikipedia.

Now that she has a better handle on scheduling, I asked Janice a few questions about her experience so far:

What’s been your biggest surprise about building?

Ginge:  It’s crazy how quickly things change.  I’ve erased things on my calendar 7000 times b/c the schedule changes everyday.  Things finish up quicker or take longer – I was supposed to have brick on Friday, then didn’t get it til Tuesday b/c the selections weren’t posted with brick color.  And this is just one house – Kevin doesn’t even know how many houses he has in production right now – he estimates somewhere between 40-50 right now.   I can’t even imagine.

What’s your favorite part so far?

Ginge:  Learning about foundation heights – it was the most involved I got to be in the building process.  I got to determine the number of stairs and rails or not…I knew I wasn’t going to get a hammer and nails and help build so this was the most interactive.  And collaborative with the trades.

She also added how much she likes hanging out with Kevin everyday.  She feels like she has a better understanding of working together.  She always gives him a hard time about being cranky and now she knows exactly why he’s cranky.  She suspects Kevin might secretly enjoy her tagging along and asking questions.  She also thinks he thoroughly enjoys when she panics.  Like when they covered her footings in dirt.  Her freak out threshold is just a little shorter than Kevin’s.

What are you most afraid of right now?

I’m not sure I buy that…here she is on Friday – a girl sitting atop her immaculate foundation. 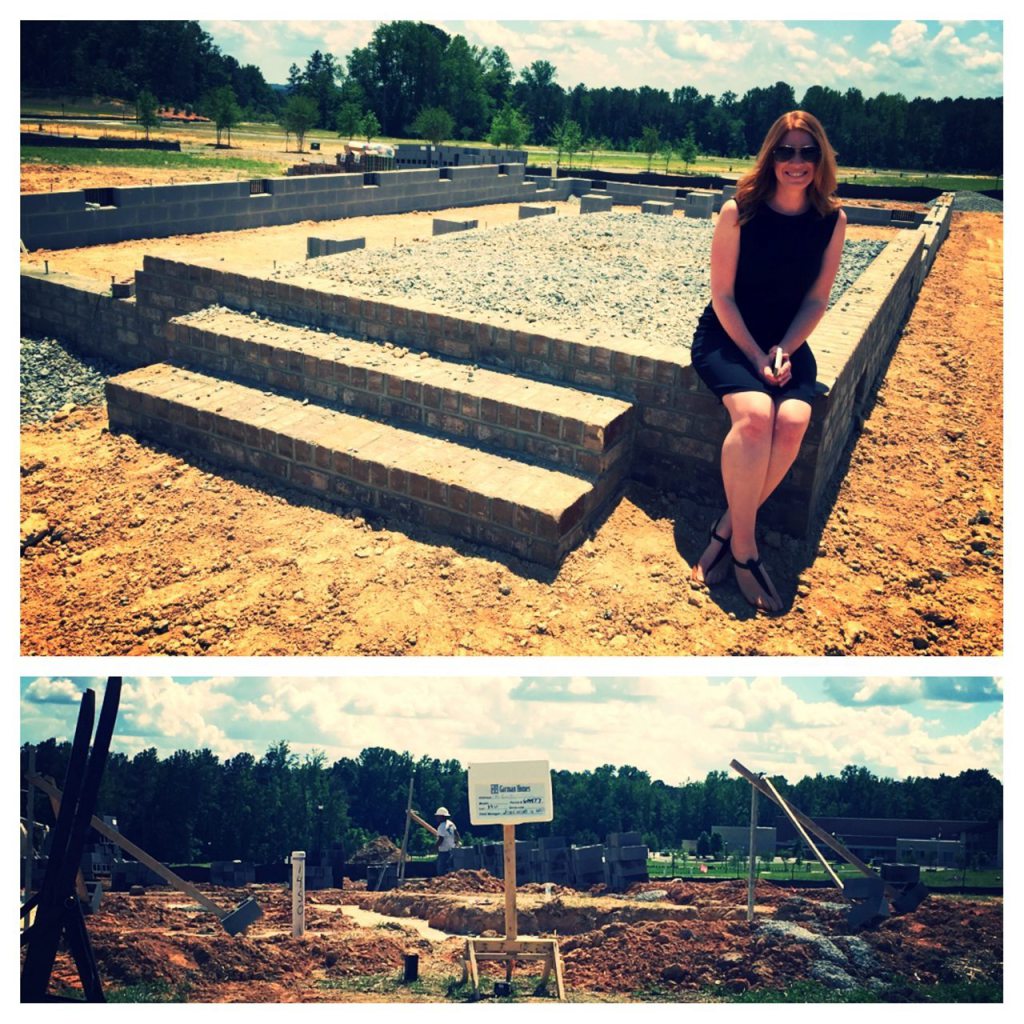 No rails needed – she got the height just right.

Not a piece of trash in sight.

Smiling like someone who worked really hard outside of her comfort zone all week and has so much to show for it.

Cuz she’s coming for ya.    And she’s bringing her tiny pink parasol with her.

Garman is an amazing company. I'm so glad I built with you all. I had an inspection done in my 12th month and was pleased that the issues found were minor. I knew Garman built a quality home. The house is also amazing soundproof. When inside, you can hear very little noise from outside. 14 months in and still love the house so much. Thank you.